Global differences in the digital vortex

Digital disruption is a global phenomenon, but that does not mean that it is evenly distributed across the globe. The Global Center for Digital Business Transformation, an IMD and Cisco initiative surveyed 953 executives across 12 countries about their attitudes and behaviors towards digital disruption. The research uncovered some interesting differences between executives in the so-called BRIC countries, Brazil, Russia, India, and China, and a basket of developed countries, consisting of Australia, Canada, France, Germany, Italy, Japan, the United States, and the United Kingdom. Figure 1: BRIC executives are optimistic about the impact of digital disruption on society 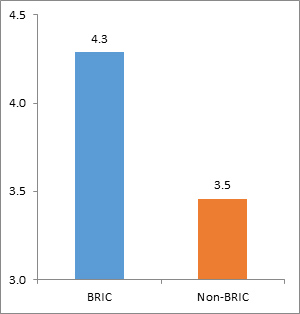 Figure 2: Number of the top 10 companies displaced by digital disruption in 5 years

Figure 3: Assessment of the negative impact of digital disruption on business performance

The source of disruptive threats

These findings point to a growing culture of disruptive entrepreneurism within the BRIC countries, particularly in China and India. They also suggest a level of complacency among non-BRIC executives. These executives are mainly focused on incumbents from within their own industries – their traditional competitors. Whereas a significant amount of digital disruption has been shown to originate from non-traditional sources. 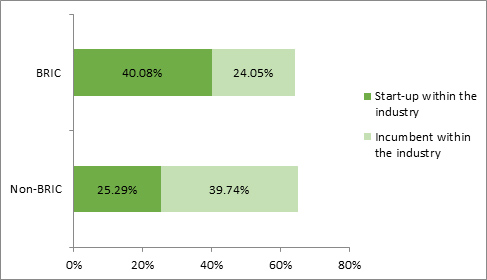 Let’s look at the specific cases of China and Germany to illustrate these differences. As Figure 5 shows, over 70% of Chinese executives believe that startups would be the most likely digital disruptors, particularly from within their own industries. By contrast, executives in Germany believed that digital disruption would most likely arise from incumbent firms from within their industry.

The executives were asked about how their organizations were responding to digital disruption, and the barriers that they faced. Both BRIC and non-BRIC executives regarded high capital investment requirements and complexity of business processes as major barriers (see Figure 6). In addition, executives in BRIC countries were concerned with a shortage of workers with the required skillsets to compete in a digitally disruptive world. This finding is consistent with research conducted by Aon, who found that BRIC countries were suffering from a shortage of digitally skilled workers. By contrast, non-BRIC executives were very concerned with regulatory requirements and roadblocks. The research findings suggest that executives from BRIC countries have a conflicted view of digital disruption. On the one hand, they are positive and optimistic about the changes that digital disruption can provide to their societies; yet, on the other hand, they are wary about its impact on their own companies and industries. They appear to be keenly aware of digital opportunities and threats, and are actively working to address them through executive action.

Non-BRIC executives, by contrast, seem less optimistic about, and less prepared for, digital disruption. They tend to see digital opportunities and threats through the traditional lens of competition. They acknowledge that digitization is occurring in their industries, but feel that they have time to change and adapt. Many of them are not ready to place digital disruption on the executive agenda.

He is also co-director of the Orchestrating Winning Performance Program (OWP).

Jialu Shan is a Research Associate at the Global Center for Digital Business Transformation.

Related topics
Leadership
Digital
Disruption
Browse all topics
Looking for something specific?
IMD's faculty and research teams publish articles, case studies, books and reports on a wide range of topics
All articles
Keep reading
Report Digital Competitiveness
IMD World Digital Competitiveness Ranking 2022
Now in its sixth year, the IMD World Digital Competitiveness Ranking, produced by the IMD World Competitiveness Center, measures the capacity and r...
By Arturo Bris Christos Cabolis José Caballero Marco Pistis and Maryam Zargari
28 September 2022, 6th edition
Article Leadership Innovation
How are you curious?
Curiosity is one of the critical factors in a business that is agile and innovative, so it is an element that is important to explore.
By Louise Muhdi
in I by IMD Brain Circuits 28 September 2022
Article Technology Management Leadership
Preventing security breaches must start at the top
Technology alone will not stop successful cyber criminals attacking your company. C-level executives must lead the way in planning, implementing an...
By Dave Chatterjee
in I by IMD September 2022, vol. 7, pp. 26-29
Article Digital Supply Chain
Utilizing additive manufacturing and mass customization under capacity constraints
Additive manufacturing (AM), originally used for prototyping, is increasingly adopted for custom final part production across different industries....
By Rachel Lacroix Anna Timonina-Farkas and Ralf W. Seifert
in Journal of Intelligent Manufacturing September 2022, ePub before print, https://doi.org/10.1007/s10845-022-02007-x
Article Leadership Stakeholder Management
Jan Jenisch
Jan Jenisch, CEO of Holcim, discusses with IMD President Jean-François Manzoni the importance of building and maintaining strong relationships with...
By Jean-François Manzoni
in I by IMD 26 September 2022
Article Sustainability Leadership Strategy
It’s time for a ‘moonshot mentality’ on climate change
Positive, broad-based leadership will be decisive in determining whether we move towards our best or worst future, says former UN Special Envoy on ...
By David Bach
in I by IMD 23 September 2022
Article Leadership Sustainability
Become a Buddha to drive sustainable transformation
Jan Jenisch, Chief Executive of Holcim, one of the world’s largest building solutions companies, shares in an exclusive CEO Dialogue with IMD Presi...
By Jean-François Manzoni
in I by IMD 20 September 2022
Article Digital Organizational Learning
3 stages of a successful digital transformation
Most digital transformations fail. Various studies from academics, consultants, and analysts indicate that the rate of digital transformations fail...
By Didier Bonnet
in HBR.org 20 September 2022
Conference Paper Strategy General Management Disruption
Self-disruptive incumbents: The role of strategizing history from the middle
By Joakim Hans Netz and Patrick Reinmoeller
Presented at: SMS 42nd Annual Conference, 17-20 September 2022, London, UK
Article Innovation Strategy Digital
Why innovators in China stay close to the market
Look at the electric shavers on offer from Philips at stores in New York, London, or Tokyo, and one will seem much like another. But go to Shanghai...
By Neil C. Thompson Didier Bonnet Mark J. Greeven Wenjing Lyu and Sarah Jaballah
in MIT Sloan Management Review 13 September 2022