Thrive as an LGBT+ executive or ally
Article

Thrive as an LGBT+ executive or ally

By Mikolaj Jan Piskorski, Ina Toegel and Maude Lavanchy
16 min.
Download full article
PRINTABLE PDF – 2MB
At a recent IMD Discovery Event participants gathered to to explore strategies for LGBTQ individuals to thrive in the workplace, and for the allies and the organizations to help in this process.

As societies across many parts of the world are making legal and cultural progress to embrace the Lesbian, Gay, Bisexual and Trans community (LGBT+ hereafter),1 many companies are still lagging behind in this process.

LGBT+ executives still find it difficult to bring their full identities to work, while their allies do not always feel empowered to help. In this article, we first describe the current situation of the LGBT+ community in the world and the difficulty of coming out and transitioning. Then, we share lessons from various guest speakers on strategies for LGBT+ individuals to thrive in the workplace and for allies and organizations to support them.

Situation of the LGBT+ community in the world

Almost 3 billion people live in countries where consensual same-sex activity is criminalized. Although significant progress has been made in the last few years, the map below shows how much still needs to be done. According to the International Lesbian, Gay, Bisexual, Trans and Intersex Association (ILGA), being gay is punishable in 70 UN member states by imprisonment, torture or even death and not one grants the same rights to LGBT+ people as their heterosexual counterparts.

In countries where laws are relatively accepting of the LGBT+ community – for example, Europe, the Americas and Oceania – LGBT+ people are still likely to suffer backlash in the streets and certain cultures can be slow to change. Take the example of same-sex marriage: In a survey on European views of minorities, the majority of people are in favor of gay and lesbian marriage in Western European countries,2 almost all of which have now legalized the practice. However, in the Central and Eastern Europe countries surveyed – none of which allow same-sex marriage – most people are against it. It has been estimated that two-thirds of the recent historical change in attitudes toward same-sex marriage in the US is due to people who are personally affected by it one way or another. But, for such a personal connection to happen, LGBT+ people need to “come out.”

While revealing one’s sexual orientation is a choice for LGB members, transgendered people often don’t have that liberty: their transition is visible. Although between 0.05% and 1.7% of the world population is born with intersex traits – that is, being intersex is about as common as having red hair – transgender people are often stigmatized and subject to multiple human rights violations:

Situation of the LGBT+ community in the workplace

Realizing one’s sexual orientation or gender identity and then sharing this information is a gradual process. Despite legal gains, most lesbian, gay, bisexual and transgender people choose not to disclose their sexual orientation. According to the Human Rights Campaign Foundation, 46% of LGBT+ individuals are closeted at work and 28% are totally closeted and not open to anyone in their lives. “Coming out” takes courage – it is an ongoing process that LGBT+ people have to face every time they meet someone new.

There are several reasons why LGBT+ people remain in the closet:

However, remaining in the closet has consequences. Whether on the factory floor or at board level, evading questions about family life can be challenging. The boundaries between personal and professional life can be blurred since the workplace is full of seemingly innocuous chit-chat such as: how was your weekend, vacation, holiday? How is your wife, husband, spouse, children? Every time these questions are asked, closeted LGBT+ people need to make a choice: Should I ignore the question? Lie about it? Avoid personal life discussions? Hence, closeted employees tend to become isolated: 39% avoid or engage less with colleagues. In addition, since not sharing one’s personal life is often seen as a lack of authenticity and honesty by peers and supervisors, closeted LGBT+ individuals can suffer on two counts.

Hostility in the workplace can be even stronger for minorities within minorities, who often suffer from “double discrimination,” e.g., LGBT+ individuals of color, as well as lesbian and transgender workers. The Catalyst reported that 80% of the transgender population employed in 2015 experienced harassment or mistreatment at work.

What the LGBT+ community and allies can do

Lessons from an LGBT+ rights campaigner
In May 2015, Ireland became the first country in the world to publicly vote on same-sex marriage, which passed with 62% of the vote. People around the world were surprised by the results mainly because of the perception of Ireland as a deeply conservative Catholic country. The following four lessons from Tiernan Brady, a political and LGBT+ rights campaigner, help explain the Irish success and provide valuable advice on how to advance the cause.

Gay and lesbian activism has gained more traction in the 20th century than ever before in history. A turning point for gay liberation happened in 1969 when patrons of the Stonewall Inn, a gay bar in New York, fought against a police raid. This event triggered protests for gay liberation and is annually commemorated with today’s “pride marches.”

In the mid-1980s, the gay male community became the LGB movement since the word “gay” was perceived as not adequate to describe everyone in the community. Trans and intersex voices began to gain space in the 1990s and called for a more inclusive community, hence the inclusion of the letter T for transgender, I for Intersex and later Q for Queer. These additions also marked a tipping point: the community was no longer only about sexual orientation but included broader issues such as gender identity and gender expression. Nowadays, there are several variations of the acronym.

Mind language: Beyond the label
People often resent being put in a box, but labels have several advantages. First, having a specific terminology allows people to articulate what they feel, think and experience, which could help individuals to “come out” and render the process less tortured and easier to explain to others. Labels are important for marginalized communities as it enables them to name their struggle. By having a label, people can “own the language” used (e.g. telling people to use the word “transgender” instead of the derogatory “transvestite” term). Second, labels create communities. The existence of a word signals its importance and that there is a critical mass of people that share similar characteristics, which generates both solidarity and a sense of belonging.

However, debate about the exact terminology of a label can create divisions. For instance, referring to the community using “LGBT+” might be perceived as not inclusive enough, since the “Q”, “I”, “A” and other letters are not explicitly stated. Nevertheless, LGBT+ is easier to pronounce and remember than LGBTQQIP2SAA (Lesbian, Gay, Bisexual, Transgender, Queer, Questioning, Intersex, Pansexual, Two-Spirit, Asexual and Allies). Until they can read fluently, allies need to first understand the alphabet. The community should be here to help them understand. There is a time to fight labels and a time for peace.

What organizations can do to support LGBT+ employees

Business case on the benefits of diversity and inclusion (D&I)
The benefits of diversity are widely researched and acknowledged. Most research has focused on visible diversity (e.g. gender, age and race-based diversity), but many aspects of individual diversity (religion, sexual orientation, family and social status) are not seen immediately. It’s our visible and invisible uniqueness that brings value to the organization and inclusion is the key to unleash the power of our rich diversity.

If you are an ally looking to persuade doubters, here are three additional reasons why D&I of the LGBT+ community is important to businesses:

Concrete steps organizations can take
To mainstream LGBT+ diversity in organizations, it is imperative that the culture and environment open up to differences. Inclusion does not mean integration. Inclusion is reached when the needs of LGBT+ employees are fully integrated throughout all key systems and processes of the organization internally, visibly represented externally, and when leaders include all aspects of diversity in a transparent manner. 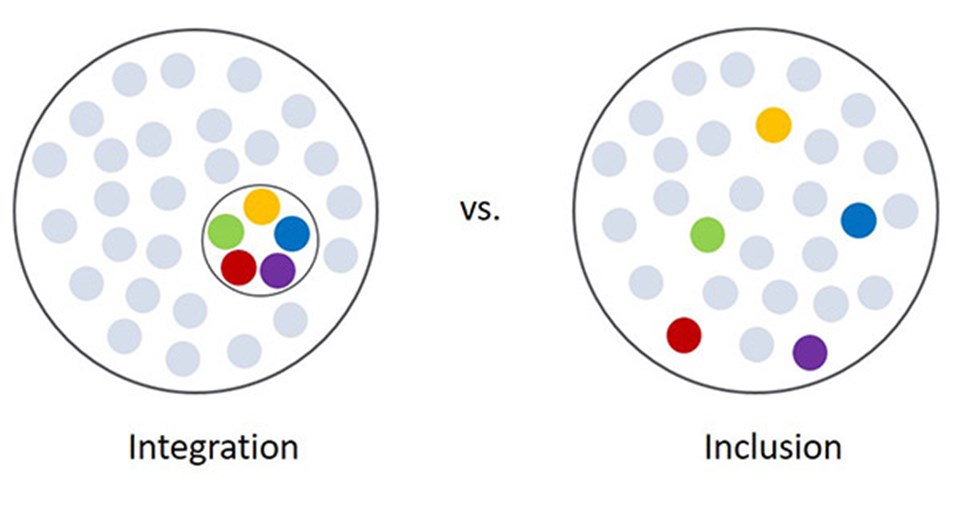 Step 1 – Assess the situation: The first step toward a successful D&I strategy is to know where the organization starts. As it is not possible to ask employees about their sexual orientation, the voices of underrepresented groups can be heard through employee networks and a workplace climate survey. Such surveys need to feature inclusion cluster questions around employees’ feelings toward how they are part of the team or not, whether they can be themselves, speak up without fearing consequences, or if they feel a need to adjust. LGBT+ networks are also useful to help employees to ask their questions and learn their rights.

Being mindful of the global situation of LGBT+ employees is also crucial when actively driving LGBT+ diversity. Globalization does not necessarily mean the same to a heterosexual employee as to an LGBT+ one: What should be an exciting opportunity to work in Dubai might not be that “exciting” when considering that homosexuality is illegal, and the laws can be harshly enforced.

Step 2 – Raise awareness and create the space to talk about it within the organization: Conversations about values, dignity and respect can be very emotional, so expect a lot of pushback and sentences such as “I’m not interested in people’s bedroom behaviors.” It is important for people to realize that the line between professional and private life is often blurred, and to raise awareness of the challenges of being LGBT+. To illustrate how difficult it is to hide one’s true identity, try the following exercise in your organization.

Box 2. “Being the other” – inclusive group exercise

Give participants the following instructions:

It is important to convey what diversity and inclusion mean to the whole organization, how it translates to business results and why it is important. The organization’s external and internal message should be crystal clear. In this context, symbols can be very powerful; for example, LGBT+ employees should feel comfortable about having a picture of their partner on the desk.

The situation of transgenders should not be overlooked. For centuries, the existence of intersex people has been hidden or attempts have been made to subject them to medical intervention. As a result, their situation and struggles are generally misunderstood. Table 1 offers some advice on how to address a transgender person.

Inclusion is a long-term endeavor and being well-placed in a given ranking or index (e.g. the Human Rights Campaign’s Corporate Equality Index) doesn’t mean the job is done. For LGBT+ employees to feel safe to come out and be at their full potential, they shouldn’t fear discrimination, isolation and homophobic jokes – 53% of LGBT+ workers report hearing jokes about lesbian or gay people at least once in a while. A true indicator of company culture is what people say in the cafeteria; vocal LGBT+ allies play a critical role in promoting a mindset change and ensuring that “office banter” is no longer tolerated.

Step 3 – Take actions: Actions should match the talk in every area of inclusion in organizational policies. Here are some options to consider:

[1] LGBT+ has become an umbrella term that covers diversity in both sexual orientation and gender identity/expression. See Box 1 for details about the historical evolution of LGBT+ acronyms.

[1] Similar positive figures are found in the US.