All executive teams confront troublesome interpersonal differences – even teams that are superficially similar. But increasing team diversity adds complexity to team dynamics. In diverse teams, differences in personality are liable to be amplified or distorted by differences in culture, gender or professional experience.

The conventional approach to working through such differences is reactive. Managers try to upgrade team capabilities in conflict resolution or discuss behavioral evidence, such as 360 feedback. These approaches often allow frustrations to build up for too long, making it difficult to reset negative impressions and rebuild trust.

A more effective approach is to surface those differences upfront, to immunize the team against the negative impact of diversity. Based on our work with leadership teams we have developed a simple tool that empowers managers to facilitate team discussions unaided (see Big Five Conversations Sidebar). 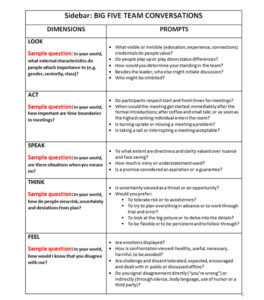 The framework surfaces the most troublesome differences, relating to how other team members look, act, speak, think and feel.

Colleagues typically make fast judgments about relative status/competence based on how others look: their age, gender, race or nationality. Greater diversity generates more labels, in the form of stereotypes. Left unchallenged those preconceptions can hurt collaboration.

A heavy engineering company we studied added a designer to its international board. From the first meeting, it was clear this person had a different take on many issues. After that first meeting, some board members were already expressing doubts about the value of the designer’s contributions – heightened by the fact she was the only woman on the team.

A global leader in the food processing industry was experiencing recurrent tensions in the top team. Through discussion, it emerged that the international executives were deeply frustrated by the lack of urgency in team meetings – a frustration that sometimes triggered brusqueness which upset their domestic colleagues. Having verbalized the problem, the team was able to set new meeting rules to engage more productively.

Speak: Divided by a common language

Diverse teams may be lulled into a false sense of similarity by their fluency in a shared language. But deeper differences in how team members express themselves are common sources of conflict, notably the “veiled no” and the “false yes”. Both can be very damaging to trust for people accustomed to more literal meanings. Conversely, too much directness can also erode trust.

Tensions in the leadership team of a pharma company we worked with centered on perceived unreliability. Offline discussions with the two antagonists revealed culturally different views about what was agreed: to one party, a promise constituted an aspiration; to the other, a “firm commitment”.

Unexpected differences in how team members think about the context often generate conflict. Team members can differ widely in their tolerance for risk/uncertainty, the importance of planning and willingness to deviate from plan.

Repeated clashes between two directors in the top team of UK hospital. He a medical doctor; she a professional manager. But the key to their long-running hostilities turned out to be wide differences in personality scores on “openness”: one favoring “big picture” thinking, the other more detail-oriented.

Team members may grow irritated with colleagues who show too little emotion or too much of the wrong kind. Colleagues can vary greatly in their levels of comfort with public disagreement – and hence misjudge the opposition to a particular issue.

The incoming CEO of a global insurance group assembled a new top team to tackle a turnaround challenge. Finding the team too cautious in its discussions, the CEO asked a coach to intervene. The team adopted the “fish on the table” metaphor to broach awkward issues – and learned the difference between “straight talk” and emotionally charged “fight talk”.

Step one is to use conversations to raise awareness of differences. Step two is to discuss how to deal with those differences and which ones require some form of agreement to ensure colleagues play by the same rules.

The benefits of anticipating and heading off conflict with the big five team conversations before it becomes destructive are immense. We’ve found that they include greater participation, improved creativity, and, ultimately, smarter decision making. As one manager put it: “We still disagree, but there’s less bad blood and a genuine sense of valuing each other’s contributions.”

Find out more about this methodology in our recent article on the subject in Harvard Business Review.

Ginka Toegel is a Professor of Organizational Behavior and Leadership at IMD. She is program director for Mobilizing People and Strategies for Leadership.

Jean-Louis Barsoux is a Senior Research Fellow at IMD.

Related topics
Diversity and Equity and Inclusion
Browse all topics
Related program
Mobilizing People
Leadership
A highly experiential leadership development program which lets you explore who you are, how effective your team leadership style is and what happens below the surface of team dynamics.
Share
Get shareable link