Which companies will survive the next crisis?

The world's largest Finance and Auto companies ranked against their competitors by their likelihood of survival released today in the Future Readiness Indicator 2022.

Tesla, Mastercard, Visa, and J.P Morgan, topped the global rankings in their respective industries in the latest edition of the Future Readiness Indicator – Automotive & Financial Industry 2022, released today. Several companies fared much worse than expected: Credit Suisse, Allianz, Ping An, and Block – all for different reasons.

IMD Business School released its inaugural Future Readiness Indicator in December 2021, based on over a decade of data (2010 to 2021), to rank the highest-revenue companies against their competitors by how future-ready they are for the post-pandemic economy and the likelihood of thriving in a world of fast and frequent change. This year’s new ranking benchmarks the corporate world’s resilience in two industries: the Automotive and Financial industries against their competitors.

“The era of easy growth fueled by the pandemic stimulus programs is over. For banks and other financial services companies, there is a changing emphasis from innovation at all costs to quality growth in 2022,” explains Professor Howard Yu, author of the Future Readiness Indicator at IMD Business School. “What you see is conservatism pays this year. Business diversification makes good sense. This is why being future-ready equals corporate success.” 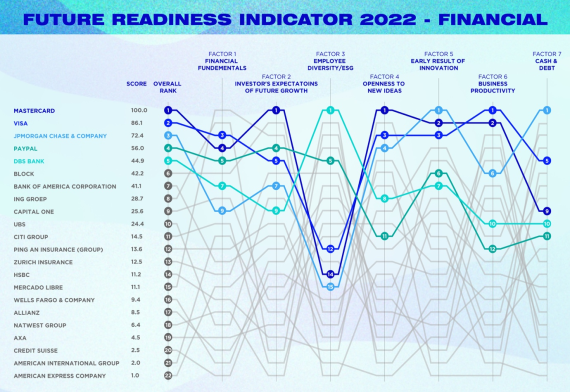 The Financial Services industry shows a reversal of fortune from fintech to big banks. Credit card companies Mastercard and Visa are the most future-proof companies this year, topping the rankings, followed closely by JP Morgan Chase as the highest-ranking bank. In contrast, Credit Suisse and American Express ranked the worst in the financial industry, holding the last places 20 through 22.

This year, some surprising results include Block (formerly Square), which landed at 6th place, behind two stalwart banks: JP Morgan Chase and DBS bank. Insurance companies Ping An and Zurich Insurance fared surprisingly poorly. Zurich Insurance sits at 13th place while Chinese Ping An drops five positions to 12th place. While the company is still strong at exploring new technologies and business models, cash flow problems (cash and debt factor) are partially due to the impacts of the China crack-down.

Unlike other banks, Credit Suisse dropped sharply, from 11th to 20th place, partially due to its recent losses and the internal turmoil due to reputation scandals. JP Morgan Chase’s surge as best performing bank is primarily due to the cloudier economic environment, favouring conservative risk management.

This year, the strongest reveal is the quick return of banks that prioritize innovation and digitalization. Fintech companies have dropped slightly as raising cheap capital to buy market share with low-cost products now no longer works. This has allowed for the meteoric surge of JP Morgan and DBS this year. As the world economy moves from one uncertainty to the next, companies that consistently hold strong balance sheets coupled with innovation will win. For fintech, this suggests that offering an exciting product alone will no longer achieve positive results as easily as last year.

The results find that for financial companies, being future-proof in today’s volatile business environment means being slightly more conservative than before in lending while driving low operating costs through digitization. Leveraging NFTs and AI to drive top-line growth and reduce the complexity of an organization to contain costs are strengths that are rewarded. The research predicts that stronger performers will be the ones to drive growth through the non-labour-intensive business models.

The Future Readiness Indicator examines the top 23 retail banks, insurance companies, and payment platforms based on $7.1 billion to $183.4 billion revenue and ranks against data from 2015 to March 2022. The indicator measures against the following criteria: financial fundamentals, investors’ expectation of future growth, employee diversity/ESG, cash and debt, business productivity, early results of innovation, and openness to new ideas. 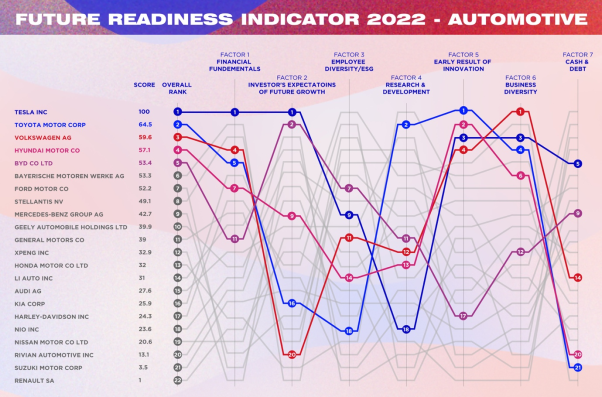 Tesla dominates again this year, Toyota ranks second, and Volkswagen comes in third in the Automotive industry. This year, the ranking introduced four new companies. Three are EV producers, Chinese Xpeng, Li Auto, and Rivian, and industry stalwart Suzuki, although along with Renault, they rank at the very bottom, taking the last two spots of the global ranking.

The sharpest climber, BYD, jumps nine places to the 5th position this year. An early mover in EV, they stopped creating combustion engine vehicles and are now 100% electric. The company is also one of the rare automakers producing its own chips. In addition, BYD has 40% of its sales outside its home base in China, resulting in a big jump in its business diversity factor.

The industry winner remains Tesla, but quickly catching up are Hyundai and BYD. Both have steadily increased in future readiness over the past few years, plus they are strong in EV and both demonstrate strong electronics capabilities. In the case of BYD, its stellar surge reflects how the global semiconductor shortages have exposed the importance of having chipset manufacturing capabilities in-house. NIO is a newcomer, and as recently as 2016, BYD ranked 18th. Their 2021 rankings –13th for NIO and 14th for BYD – suggest that these two companies are poised to survive future crises and achieve continuous growth.

Interestingly, to an extent, Toyota, Nio, and even Tesla ranked surprisingly poorly on gender diversity, whereas Harley-Davidson (17th) and Ford Motor (7th) ranked highest on this metric.

The research finds that industry convergence is seen where the gap widens between traditional and EV. The analysis reveals that most traditional automakers, despite mechanical expertise, share conservative views and are relatively unsuited to address vehicle electrification, connectivity, and autonomous driving. Still, the most valuable know-how for the future is not just EVs anymore but capacities in software and electronics for automakers. As seen with soon-to-be-trialed self-driving public buses in the UK, the future resilience of the auto industry hinges on autonomous vehicles and electronic transport – but most importantly, self-reliance on electronics, heightened by the global chips shortage.

The second-ranking Toyota had prepared itself by stockpiling chips, and Toyota avoided the worst of the disruption and reclaimed the position of world’s largest automaker.

During the chip shortage, Tesla’s expertise in programming allowed it to rewrite its firmware, continue production, and sell a record number of vehicles. Tesla was future-ready before they ever built their first car.

Renault remains in last place. Its recent turmoil has cast constraints on the company’s capital expenditure, allowing for less effort into research and development than its peers.

As COVID-19 repercussions on the economy recede slowly, the industry grapples with equally turbulent new threats. Fuel prices will accelerate the energy transition to electronic parts and battery availability for the auto industry. Suppose the pandemic, which triggered a surge in purchasing of goods, caused the global supply chain to buckle. In that case, Russia’s invasion of Ukraine and China’s continuing zero-Covid policy risk is breaking it completely.

Global supply chains are too complex and interconnected to be immune to shocks, especially as seismic as a worldwide pandemic or wars. Therefore, new capacities force companies to adopt novel strategies to keep goods moving. Today, backlogs and breakdowns are the new normal, making getting ahead of disruptions as early as possible more crucial than ever for future readiness.

The Indicator included the top 22 automakers based on $6.2 billion to $284.4 billion revenue and ranks against data from 2010 to March 2022. We added three young EV makers, XPeng, Li Auto, and Rivian, whose revenue is relatively small but high market value, into this year’s ranking.

The rankings results are based on objective measurements to reach a composite score via an AI-driven algorithm to compare against the industry average. It uses hard data to rank companies against critical drivers of innovation: Financial Fundamentals, Investors’ Expectations of Future Growth, Employee Diversity/ESG, Research & Development, Early Results of Innovation, Business Diversity, and Cash and Debts. The data period for the ranking is from 2016 through March 2022.

This year’s results consider companies’ ESG (Environmental, Social, and Governance) performance in the ranking. This includes the gender diversity of the board and executive teams and diversity in leadership mindset, which correlates to better innovation in companies. This metric also considers the country’s competitiveness of each company’s headquarters to gauge the ease of doing business and governance.

Looking at Tesla’s ESG score as an example, this is owing to governance controversies as reported by the media. Although Tesla has acquired its green credentials for electric vehicles, it scores poorly on the overall ESG because of chief executive Elon Musk’s governance style.

This year’s Indicator includes the influence of female board-level executives and mid-senior managers on a company’s future-readiness. The results reveal that most industries are going through an industry convergence seen as colliding trends. The ranking considers diversity in gender, nationality, and mindset of executives playing an increasingly influential role in corporate success – outperforming their competitors and being more resilient.

The trend sees the limited capacity of an overly homogenous company to reinvent when too many employees come from the same background, whether in terms of CEO mindset or gender, and critical mass is the tipping point to success.

China’s BYD and Volkswagen rank highly in gender diversity among the auto companies, while Nissan and Kia are the opposite. In financial services, DBS Bank and JP Morgan have performed well in this area, allowing their future-readiness score to be the highest among banks. However, HSBC and Credit Suisse perform poorly in diversity.

Overall, the 2022 Future Readiness Indicator draws the following lessons for corporations to navigate.

1)Supply chain game-changer: from transparency in 2021 to resilience in 2022

Despite economic volatility, industry convergence is accelerating. Compared to last year, Tesla’s readiness score surges far ahead of other carmakers in the auto industry. Last year’s Toyota at #2 commands a total score of 77.9. This year, Toyota remains at #2, but the overall score drops to 64.5. What’s needed even more urgently is for carmakers to build up capabilities in electronic components and software. Last year Toyota stockpiled to keep the lights on – but it isn’t effective in the long- term. Digitizing the supply chain might have sufficed during the Covid pandemic as the industry adjusted supply to new demands. In 2022, it’s about supply chain resilience, not just supply chain transparency.

2) The changing game for growth strategy: from a deep singular market in 2021 to broad, diverse geography in 2022

With the increasing tension of geopolitics, companies must diversify away from individual country risks. As growth slows down across the board, the company’s readiness is reflected in the development quality. Specifically, it’s whether a company can diversify its reliance from a single geographic market. BYD, for example, is not only vital in electronics and batteries, and those are the capabilities for future mobility. But it has, like other top-ranking companies, increasingly diversified its revenue sources across broader geographic regions. The combination of new capabilities and diversification propels these companies to climb up the rank for 2022 and beyond.

3)The changing risk appetite: from growth at all costs in 2021 to stewardship in 2022

Last year’s pandemic has pulled up much of the future demand, and that one-off driver has been depleted. Fintech is dropping in its ranking, including Block and PayPal. We see big banks like JP Morgan Chase or DBS surging up this year’s rankings in their place. But the top-ranking companies remain Mastercard and Visa. Their speed of decision is high – similar to the tech sector. And at the same time, they can forge strategic partnerships with big banks and fintech. With healthy balance sheets, these are the winning behaviours to adopt in 2022.

4)The (un)changing definition of future readiness: from resource abundance to scarcity

In 2022, both quality and the size of earnings matter. As recession is a possibility, those who can navigate the next crisis when it comes will be more likely to achieve a robust financial balance sheet and an unparalleled growth trajectory.