“The IMD MBA was my stepping stone to change”

From chartered accountant to banker to success 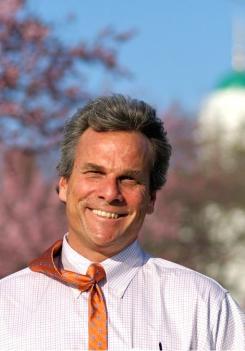 ful author, IMD alumni James Breiding revisits the pivotal moments of his career and the MBA that allowed him to escape a life-sentence of internal auditing.

“Swiss Made: The Untold Story behind Switzerland’s Success” is the fine feather in the cap of Naissance Capital co-founder and director, James Breiding. The author talks of the creative process that he applies to all of his projects and of the book will soon be followed by a second.

Breiding’s first profession was as a chartered accountant with Price Waterhouse Cooper in Atlanta, but after four years and still only 26, he aspired to a change. He could not see himself as an internal auditor for the rest of his life, but when no new doors opened, a talent hunter suggested that he first obtain an MBA.

He admits that he embarked on the MBA less out of passion, than to get the “ticket”.  In retrospect, he says that it propelled him forward: “The IMD MBA was my stepping stone to change, my opportunity to discover new territories.”

It was also the beginning of his international career. The son of a physicist who worked on the Apollo project, he had grown up in Cape Canaveral, Florida. “We’d sit on the cars and wait for the ground to shake,” he remembers of those exhilarating moments of suspended animation as the rockets left the ground.

“It was a time when the US thought everything was possible.”

While exploring various MBA options, he discovered that IMD’s program lasted a year, and as a young father, this was the only time he could afford.

After 18 months in Zurich with PWC, who had sponsored his Master’s, he moved to become the personal assistant of Dr. Jurg Geigy, on the management committee of Julius Baer. It was his first job outside of public accounting.

“I was introduced into the hush-hush world of private banks and real wealth,” he describes. Geigy came from one of Basel’s most distinguished families and heirs to the company that laid the foundations of the Basel chemical industry. “I was exposed to exceptional people, and began to appreciate how the complex puzzle of Switzerland fit together.”

By 1999, he co-founded Naissance Capital to identify niche investment opportunities for wealthy individuals and worked closely with the legendary Sir John Templeton.

By this time, Breiding had decided that Switzerland was a good place to raise his still expanding family: “Safety, sports, seasons, a central location and people from all over the world were just as important as career and personal ambition.”

Furthermore, being an outsider gave him a vantage point that allowed him to observe Switzerland from the inside. “It really opened my eyes to the way the country ticked.”

His parallel career as a writer came out of happenstance, when the Economist needed to cover the story of the Jewish legacy money stashed away in Switzerland, but didn’t have a Swiss correspondent. He pitched an article and was thrilled when it was published; then went on to write about Swiss matters for the Financial Times, the New York Times, Wall Street Journal and Foreign Affairs, even garnering a nomination for the Pulitzer Prize along the way.

His book, ‘Swiss Made’, published in 2013, was an offshoot to the writing on Switzerland that he had been doing over the years. Although it was intended for foreigners, it was met with enthusiasm by many Swiss who proudly told him: “This is who we really are!”

The book tells the story of the unsung heroes and hidden talents that have made Switzerland the most competitive country in the world. “No Swiss would get away with the bragging,” he ventures. Translated into several languages, it has sold more than 100’000 copies, largely on the back of events and referrals by Swiss embassies worldwide.

Breiding argues that modesty has given Switzerland its competitive advantage: contrary to more powerful nations such as the US, UK, France and Japan, Switzerland does not instill a sense of superiority in schoolchildren. Arrogance can backfire he notes, whereas the modesty and caution that come from limited resources and land can give an edge in today’s world.

Breiding has taken a liking to writing and is now preparing his second book on this very theme. With the provocative title “Too small to fail,” it describes how other small countries such as Denmark, Finland, and Singapore share Switzerland’s remarkable competitiveness.

Also a Harvard alumnus, Breiding has a fellowship with Harvard’s Center for International Studies to launch a video initiative to highlight Swiss role models, especially to a younger generation that no longer reads. “We learn from emulation so there is no more effective means of education as role models,” he says.

He enjoys dabbling in film and says jestingly of another endeavor recently shown in China that ‘More than Cuckoo Clocks’ is the closest he’ll ever get to Steven Spielberg!

Everything creative is a surprise, he muses, a principle he has applied to all of his jobs, including as an investor when he looks for “anomalies that are off the beaten path”. From numbers to words and back again, Breiding says life is an exciting journey, and IMD provided him a valuable ticket to expand the opportunity set of destinations.