Developing people in a time of digital disruption
Article

Developing people in a time of digital disruption

At a Discovery Event on developing leaders amidst digital disruption, Professor Jennifer Jordan outlined the opportunities as well as the challenges that come with managing people in the digital age, as organizations seek to adopt agile and technology-driven approaches.

What unique traits or skills do leaders need to be successful in the digital age? This is a question that companies are increasingly asking themselves as the pace of digital transformation accelerates. And as companies focus more on innovation, many are also contemplating how employee performance development systems need to evolve.

How useful, really, is the traditional year-end performance review in a world of agile development and dynamic goal-setting? More generally, the need to rethink people management is brought into stark relief by the arrival of younger generations in the workforce. Millennials and Generation K (also referred to as Generation Z) bring their own values and skills to the leadership mix, which firms can seek to understand and then leverage for future growth.

As the world enters the digital era, the practice of leadership is changing. What are the main differences? First, people in companies have traditionally looked to their leader for technical expertise. Today, staff often have deeper subject knowledge than their boss. Similarly, a core part of the leader’s job was to mentor junior colleagues, whereas now “reverse mentoring” – the pairing of senior executives with younger employees who advise them on current trends and technology – is gaining traction. On a more basic level, the leader was the “holder” of power in an organization. The current trend, in contrast, is for leaders to empower others. Organizations have also shifted from having teams collaborating face to face to working in virtual teams.

What about changes in the wider landscape? In the pre-digital age, people could control the level of transparency in their lives. They could determine what they wished to reveal about their life and identity outside of work, but 24/7 accessibility and social networks have since blurred the boundaries. The upshot is that building and leveraging one’s wider networks is increasingly essential to professional success. Lastly, the pace of change has accelerated, and the rise of new digital giants has upended market dynamics. Corporate leaders who previously had a good grasp of who their competitors were are now being blindsided by disruptors.

The portrait of a digital leader

From Angela Ahrendts at Burberry to John Stack at the Tate Modern museum, highly successful digital leaders tend to have eclectic backgrounds. Not all are technology experts. Instead, what these digital leaders have in common is a talent for shaping companies into future-oriented and digitally savvy new incarnations. These executives possess qualities that allow them to make a powerful case for change – even in traditional organizations – and then engage and inspire people to execute their vision.

IMD Professors Jennifer Jordan and Michael Wade have conducted research with over 1,000 senior business leaders globally to pinpoint the unique skills leaders need to be successful in the digital age. Their leadership model outlines seven essential competencies that predict success in digital companies, as well as in companies that are in the process of digitalizing: Successful digital leaders are also known to be:

Performance development in the digital age

The traditional year-end performance review is becoming a thing of the past for many companies. General Electric, after 40 years, ditched its widely known Employee Management System for a new way of looking at Performance Development. This was essential to support GE’s adoption of FastWorks – a start-up-inspired process for problem solving, based on fast iterations – in the quest to be more agile, lean and customer centric.

Using FastWorks in its development process, the HR team could leverage employees’ insights and rapid prototyping to build a new system with unique features, such as real-time feedback, upward feedback and dynamic goal-setting. However, initial test results were disappointing – no one used the tool as they felt uncomfortable actually providing the feedback in real-time and felt no clear incentive to do so.

Subsequent iterations resulted in a new [email protected] app designed to encourage a “growth mindset” rather than a “fixed mindset.” This system created a new terminology to help foster constructive conversations about performance – providing insights, as opposed to feedback, and suggesting continues or considers to inspire behavior change. 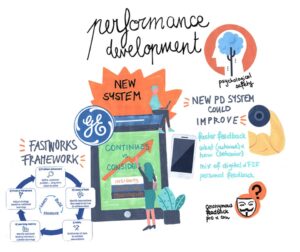 Lessons from the field: the art of designing performance development tools according to seasoned executives

The human side of digital transformations

One of the most difficult challenges for companies when they are undergoing digital transformation is to overcome the “corporate immune system.” New initiatives, new people and new technologies are often perceived as a threat by organizations. As a result, companies naturally create “antibodies” that kill nascent change initiatives. The Dutch telecom provider KPN was well aware of this risk and therefore created from scratch a separate innovation arm, tasked with creating a new IT infrastructure and client interface. This separate entity of around 30 scrum teams functioned in stealth mode for six months, giving them the freedom and autonomy to function in “start-up mode”, with faster ways of working and less corporate red tape to traverse. KPN also changed its hiring practices to better attract star software developers to the project.

So far, KPN’s digital transformation has saved the company €450 million after three years. On the client-facing side, KPN’s Net Promoter Score also improved by 20 points. 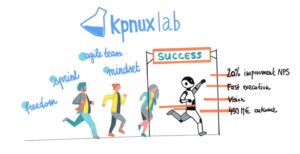 New generations: Mixing old and new in a digital world

As younger generations join the workforce, companies are realizing that they must adjust many internal processes in order to leverage the strengths of these digital natives. Millennials (born roughly between the years 1980 and 2000) and the following cohort, Generation K, have come of age in the digital era. They bring to the workforce new skills and new mindsets. Understanding these unique qualities is the first step for firms to create a fruitful generational mix. For example, Millennials have been shaped by cultural and political forces to appreciate different leadership models. They do not respond well to classic, top-down corporate hierarchies. Instead, they value a more collaborative approach in which they shape a fast, organic, bottom-up organization. They are also motivated by ambitious projects that fit a “quest” narrative. Tolkien’s Lord of the Rings hero Gandalf is the archetype of an attractive leader to Millennials. His laissez-faire leadership implies that he trusts the team to learn. Gandalf the wizard comes in only when he is needed, does not punish mistakes, protects and motivates the team, and is wholly reliable.

Divergent leadership models between older and younger generations, however, inevitably create tension in day-to-day management relationships. Many firms are grappling with how to give constructive feedback to Millennials in the context of performance development. Pascal Wicht, through his ethnographic approach to understanding Millennials, has concluded that the best method for performance feedback and development with Millennials is to create an ongoing conversation with weekly check-ins, rather than conduct formal performance reviews. In addition, bosses can start feedback sessions by asking Millennials to review themselves; they are a very critical generation and self-reflection helps them gain ownership of their performance. It is important for bosses to amplify positive performance, as Millennials are particularly sensitive to negative performance feedback. Then, as a second step, managers can help define solutions to weaker facets and thus take on a more inspirational coaching role.

Digital tools in the hands of Millennials

There is no single recipe for digital transformation: Every company takes a slightly different path in adapting to the digital age. In this sense, companies are like an orchestra that gradually introduces new instruments, section by section, until an entirely new symphony can be played. The best of these orchestras are those that foster the skills of digital leadership among their players and welcome younger performers into their ranks.

Related topics
Agility
Leadership
Technology Management
Talent Management
Organizational Behavior
Organizational Learning
Disruption
Performance Measurement
Browse all topics
Looking for something specific?
IMD's faculty and research teams publish articles, case studies, books and reports on a wide range of topics
All articles
Keep reading
Article Leadership Strategy
Jean-Pascal Tricoire
Jean-Pascal Tricoire, CEO and chairman of Schneider Electric, discusses how decentralization drives his corporate thinking
By Jean-François Manzoni
in I by IMD 18 November 2022
Article Digital Technology Management Growth
Victims of their own success
The world’s largest technology companies have delivered stellar growth, but the good times may prove their eventual undoing, argues Mike Wade, Prof...
By Michael R. Wade
in I by IMD 18 November 2022
Article Leadership Strategy
How to make your matrix organization really work
Much has been written about why matrix organizations are needed and what they look like at a surface level. Far less advice is available about what...
By Vishal Bhalla Daniel Gandarilla and Michael D. Watkins
in MIT Sloan Management Review Blog 17 November 2022
Article Leadership
Power to the people: Energy’s decentralized future
Jean-Pascal Tricoire, CEO and chairman of Schneider Electric, tells IMD President Jean-François Manzoni how decentralization drives his corporate t...
By Jean-François Manzoni
in I by IMD 15 November 2022
Article Leadership Strategy General Management Team
The mega dive, with IMD professor Cyril Bouquet
IMD professor Cyril Bouquet introduces his "Mega-dive" concept and how it can bring people together to build a shared vision of the future
By Cyril Bouquet
in I by IMD 10 November 2022
Article Innovation Supply Chain Technology Management
Warehouses give ‘predictive maintenance’ a new foothold
PM was one of the most promising applications in the Industry 4.0 revolution, but for years it struggled to find traction. Thanks to unexpected new...
By Ralf W. Seifert and Richard Markoff
in I by IMD 9 November 2022
Article Leadership Sustainability
Transform climate grief into sustainable business leadership
Executives and organizations should harness the impact and power of climate grief to accelerate action on sustainable business transformation, says...
By Natalia Olynec
in I by IMD 8 November 2022
Article Supply Chain Technology Management
How vulnerable supply chains deliver a world of trouble
Manufacturers are for the first time bearing the brunt of cyberattacks. Defending a company’s downstream supply chains is just as important as maki...
By Stephen Phipson
in I by IMD 7 November 2022
Article Innovation Disruption
Could psychedelics open new doors for science and business?
Psychedelics. Just mentioning the word triggers a wealth of opinions, stigmas, misconceptions, and judgments that are often based on loosely founde...
By Alyson Meister Kaja Oppegaard Eric Grotefeld and Cyril Bouquet
in MIT Sloan Management Review Blog 3 November 2022
Article Sustainability Technology Management Leadership
Préparer la prochaine génération de leaders aux crises de demain
A few years ago, one of us helped redesign the undergraduate curriculum at our university. One of the main goals was to make students more ethical ...
By Arnaud Chevallier and Knut Haanaes
in Le Temps 2 November 2022