The beginning of the year is the time where think-tanks and economists predict the trends, or forces, that will shape economic and social outcomes over the next twelve months.

The common ground of different studies suggests an extension of what we experienced last year: skepticism about globalization, inward looking governments, restrictions of movement of people and goods, changing demographic characteristics, as well as geopolitical tensions that bring forth concerns of war, trade or otherwise. The implied political and economic uncertainty affects competitiveness.

How do countries navigate this environment to secure sustainable value creation and ensure the prosperity of their people? Taking the 2019 IMD World Competitiveness Yearbook as a starting point we note that economies varied in their reaction to the challenges they faced. While we don’t measure the range of specific responses, we are able to measure their perceived effectiveness through the IMD Executive Opinion Survey. Despite a somewhat sluggish performance in Western Europe and North America, they, together with Eastern Asia, mostly populate the top half of the competitiveness ranking. In this context, the data show that, strong institutions are an important component for addressing the given challenges.

Institutions play a fundamental role in smoothing the impact of political and economic uncertainty. They improve stability and, therefore, affect investments and innovation. Research shows that economies with high quality institutions tend to exhibit higher private investment rates and growth, inferring a higher quality of life for citizens.

Table 1 presents the top and under performers in several aspects of institutional quality. Economies that rank in the top three in these indicators, place in the top quarter of the overall competitiveness ranking. Conversely, countries that rank in the bottom three in these institutional aspects, rank in the bottom quarter of the overall ranking. For example, Singapore, Hong Kong and the UAE top the legal and regulatory indicator, and rank in the top five of the overall ranking. The most underperforming economies in this indicator – Greece, Croatia and Venezuela – rank 58th, 60th and 63rd in competitiveness. Government policy transparency is topped by Finland, Denmark and Norway, which rank 15th, 8th and 11th in the overall ranking. The underperformers in transparency of government policy – Slovak Republic, Mongolia and Venezuela – rank 53rd, 62nd and 63rd in the competitiveness ranking.

Figure 1 highlights the role of institutions through government policy adaptability and stability. In the Executive Opinion Survey high level managers are asked to evaluate the adaptability of government policy to changes in the economy as well as the risk of political instability in their country. The left chart shows that high scoring economies in policy adaptability, such as Singapore and Norway, are the same that are placed high in the competitiveness ranking, while countries that score low in policy adaptability, such as Argentina and Brazil, also have a low standing in the overall ranking. The (negative) relationship is strong with a correlation coefficient equal to -0.75.

The chart on the right in Figure 1 exhibits the relationship between the risk of political instability (the higher the value the more stable the economy is) and the competitiveness ranking. Similarly, it shows that high levels of political stability are associated with higher competitiveness levels across all countries. This also has a strong (negative) relationship, with a correlation coefficient equal to-0.79. 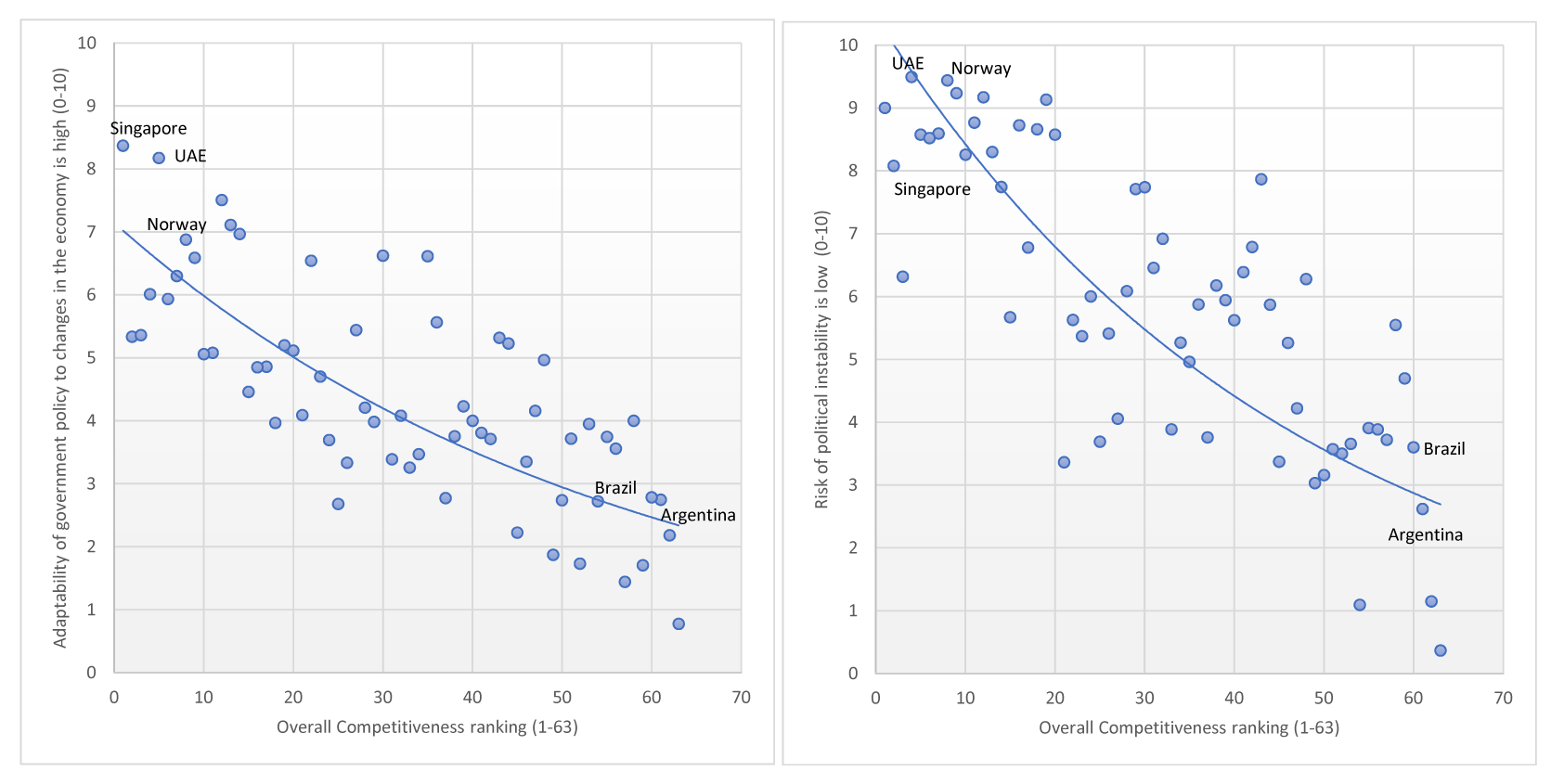 In fact, there is a strong positive association between the institutional framework sub-factor and the overall competitiveness ranking, which is presented in Figure 2. The institutional framework sub-factor (a component of Government Efficiency) can explain 86% of the variation of the overall competitiveness in 2019 (R-squared=0.86, observations=63). Figure 2 shows this strong relationship which is characterized by a correlation coefficient equal to 0.93. This implies that the countries that rank high in the institutional framework sub-factor, are the countries that perform very well in the overall competitiveness ranking. For example, Switzerland, the Netherlands, Norway and Denmark rank in the top 10 in both dimensions. Argentina, Brazil and Mongolia are in the bottom 10 for both. 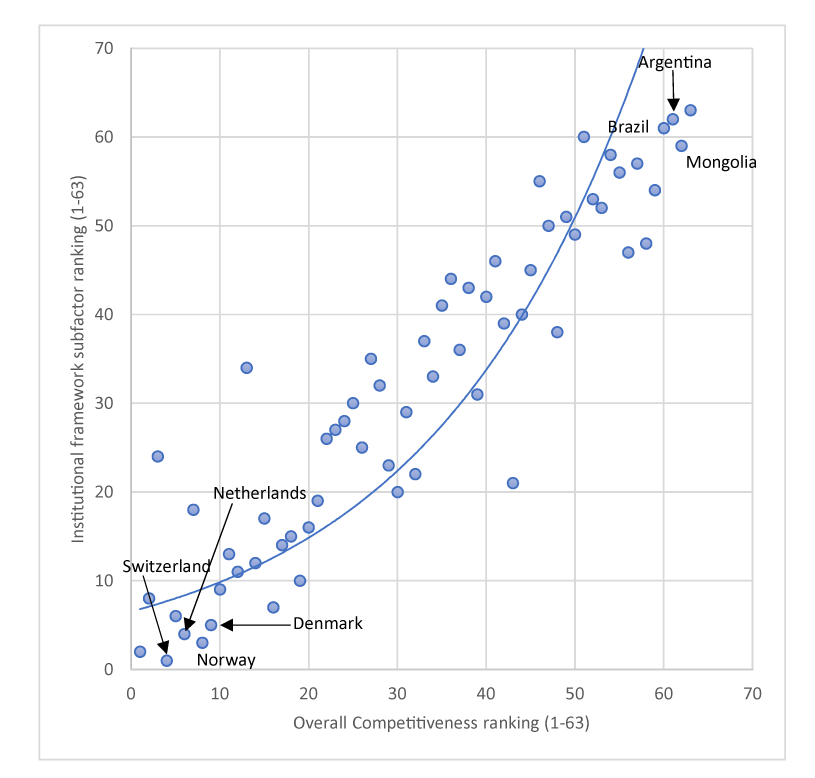 Uncertainty is likely to continue to challenge countries in their drive toward competitiveness in 2020. What past data has shown is that economies with strong institutions tend to be more successful in mitigating this impact by providing a predictable context for investment, innovation, and value creation.

Related topics
Competitiveness
Browse all topics
Looking for something specific?
IMD's faculty and research teams publish articles, case studies, books and reports on a wide range of topics
All articles
Keep reading
Article Competitiveness Customer Centricity
Customer loyalty is a myth, just ask my taxi driver
In his new book The Human Experience, John Sills explains why the “usefulness” of a retailer or service provider is far more important than any mis...
By John Sills
in I by IMD 9 January 2023
Report Competitiveness Talent Management
IMD World Talent Ranking 2022
As talent migration patterns remain unpredictable, governments and businesses attract local and foreign talent by boosting overall appeal of their ...
By Arturo Bris Christos Cabolis Marco Pistis and José Caballero
December 2022
Article Strategy Culture Innovation Leadership Competitiveness
Align strategy and culture for a competitive edge
Leaders can harness their attention, motivation, capabilities and capacity to link strategy with culture, and reap benefits for every stakeholder.
By Patrick Reinmoeller
in I by IMD 2 December 2022
Article Competitiveness Digital
Time to think again about Competitive Strategy
Digital titans such as Amazon, Facebook and Google continue to dominate our economic landscape. Indeed, over the last few decades, they have genera...
By Mohan Subramaniam
in The European 2 November 2022
Article Technology Management Competitiveness Strategy
Expanding competitive strategy mindsets from industries to digital ecosystems
Industries play a monumental role in the business world. They bestow firms with an identity. They help them find common buyers and suppliers, as we...
By Mohan Subramaniam
in Thinkers50 Blog 11 October 2022
Report Digital Competitiveness
IMD World Digital Competitiveness Ranking 2022
Now in its sixth year, the IMD World Digital Competitiveness Ranking, produced by the IMD World Competitiveness Center, measures the capacity and r...
By Arturo Bris Christos Cabolis José Caballero and Marco Pistis
28 September 2022, 6th edition
Article Human Resources Competitiveness
The workers’ revolution ushers in a new era of autonomy
A new wave of employees is demanding independence and flexibility. Business leaders need to keep pace if they are to avoid missing out on potential...
By Arturo Bris
in I by IMD September 2022, vol. 7. pp. 50-52
Article Competitiveness Economics
Keeping economies connected as regions drift apart
Executives quizzed in 63 countries reveal a new “interconnected” phase of globalization, with wide-ranging implications for governments and compani...
By Christos Cabolis
in I by IMD 1 September 2022
Book Competitiveness Strategy Digital
The future of competitive strategy: Unleashing the power of data and digital ecosystems
How can legacy firms remain relevant in the digital era? In The Future of Competitive Strategy, strategic management expert Mohan Subramaniam expla...
By Mohan Subramaniam
Published By MIT Press ©2022
Article Competitiveness Finance
Four reasons not to be deterred by the crypto winter
The sharp fall in the value of cryptocurrencies this year is misleading. The underlying blockchain technologies remain truly transformational acros...
By Arturo Bris
in I by IMD 20 July 2022