CEDA’s EPO is Australia’s premier series of briefings on the Australian economy and politics for the year ahead. Running for more than 30 years, the EPO brings together political, economic and business leaders and provides CEDA members, and this year IMD Alumni, with business intelligence on the environment they will be operating in over the next twelve months.

This was enabled by the IMD Alumni Club of Melbourne, Julie Wehbe (President) and Greg Robinson (Board Member). 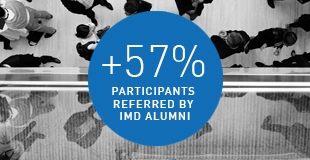 As Alumni, you are best qualified to know the kind of person who would benefit most from an IMD program.